Sooner or later a kiddo is bound to come home from school with a sampling of some less than ideal language. Most likely the first time they hear the word/words they won’t even necessarily know what they mean, which hopefully gives you a chance to get ahead of the curve!

Today a good friend was telling me about how her oldest came home with an awesome new word, beginning with the letter “F”, to add to her repertoire. Ugh!!! So frustrating and one of those moments as a parent when you just see a little piece of the innocence of your baby slipping away.

Unfortunately, a week ago I had a similar experience. In our house we have a “Swear Jar” and currently the “S” word is “Stupid” and the “H” word is “Hate,” so I was feeling like we were holding that loss of innocence at bay for just a little while longer. Then the other day at dinner, the girls were whispering something about a bad word, which I misheard, thinking they were in one of their daily discussions on who said the “S” word, in what context, and how much trouble they should get in. But then I realized they were whispering extra low, and instead of saying “Mommy, it’s really, really bad to say the ‘S’ word, right, like that’s the worst right?” it was actually the letter “F” they were saying! 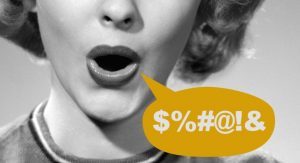 Oh crap!!!! Caught slightly off guard I led with, “yes, that’s a really bad word that adults use sometimes when they are super mad.” Not exactly a very full description, and implies it’s o.k. for adults to say in certain scenarios–which of course our oldest honed right in on: “So when I’m a grown-up like you I can say it?” No, that wasn’t really what I was saying….

In the end, I did the best due diligence I could while hurriedly plating up tacos for everyone, without enough caffeine coursing through my veins, and in the middle of a week Clark Kent was traveling and I was already slowly falling off my game. However, after about 15 minutes I mentally regrouped and realized I’d never asked where they heard it. With eyes downcast and nervous smiles, they both simultaneously whispered “Daddy”!

*@#% you Clark Kent and your not quite mild-mannered grumpy, lawyer language you sometimes fail to completely leave at the office!!!!! If I can rein in my ability to swear like a sailor around the kiddos, gosh darn it, you can, too!!! Needless to say, Daddy will be properly funding the Swear Jar going forward–or perhaps I should start calling it the “College Fund Jar! ” 😉

You know it’s going to happen sooner or later, it just feels much worse when it happens on your watch, but at least they knew it was wrong and weren’t actually busting it out to express their displeasure when the Little Dude gets into their dress-up clothes!!