Getting my Head, and My Arms, Around that Little Boy

Prior to having kids, I envisioned myself as a “boy mom”. While I was still fairly girly in that I loved Barbies, clothing, and crafts, I spent most of my younger days with my brother and his best friend, roaming the neighborhood in search of trees to climb, backyards to invade, or places to build forts. We tore through the streets on bikes and made bike jumps to tempt fate on; we played hide-n-seek until the dark was a blanket over our quiet section of town; we spent hours in the snow building tunnels and having sled races; and we also physically fought like cats and dogs right up to the point I realized my little brother was no longer that little and I needed to switch to mental warfare.

So when I first got pregnant, I was pretty sure I would have boys and we would have lots of shenanigans like I did growing up. Then I had a girl, and then a second, and I never looked back. All the girlier things that I loved came to life again, and of course, my ladies enjoyed fort building, too! For five years, I was mired in dress-up clothes (which sometimes included my wedding dress); puzzles that got more piece laden by the year; cheap nail polish that chipped off merely minutes after drying (until I gave in and shared my OPI *sigh*); gymnastics; and every game from Candy Land to Parcheesi.

And then, shocker of all shocker, about three and a half years ago my doctor informed me that our third baby would be A BOY!! Obviously, one wants a healthy baby, regardless of the sex, but I would be lying to myself if I said I wasn’t somewhere in the neighborhood of disappointed. I remember asking the ultrasound tech if she was really, really, sure? Laughing, she of course showed me the non-negotiable evidence of his boyhood! I really felt like I had no idea what I was ever going to do with this little creature who would not be interested in tea parties; would probably want to ruin his shoes in every mud puddle we found; and would most likely put his sisters’ Barbies into make-shift gallows like my miscreant brother had! 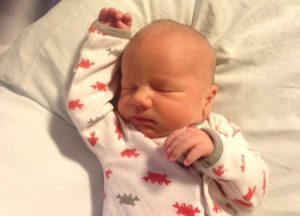 My little wild-man at one day old.

Flash forward to today–I have spent about an hour building intricate houses, towers, and parking garages with Magna-tiles for the sole purpose of giving the Little Dude his next building to “smush”; I gave about fifty airplane rides on my legs; we hit mini-beach balls all over the house with golf clubs; and then we ran in circles in the back yard, pretending to be Lightening McQueen, where we were supposed to ultimately crash into each other, fall on the ground, and then laugh hysterically. 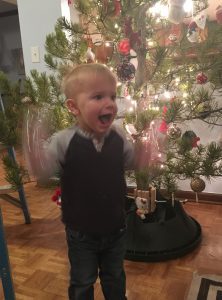 Because you should totally shake Mommy’s glass Christmas balls at high rates of speed.

Some days I still think I am probably a better “girl mom,” but I do think I have risen to the occasion with this nutty little, rough-and-tumble dude who seems to barrel his way into everything around him with such a lovely zest for life and simultaneous lack of awareness of any breakables! He has certainly rounded out our family in a way I didn’t anticipate, and the girls dote on him with a mix of great affection and occasional torment!! I like to think he will be a very sweet, enlightened boyfriend/husband some day! 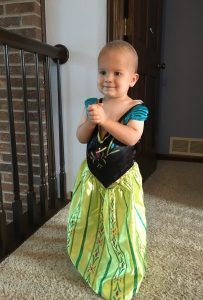 Sweetly indulging the “torment” portion of having two sisters.

Yesterday, as I put him down for his afternoon siesta, with big blue eyes staring up at me with so much genuine adoration and trust, I got the sweetest “night, night, Mama, I love you,” and I wondered how I could have ever even thought appreciating this little guy would be hard!